The incidence of agglomeration economies on location of business is an issue that has occupied the attention of economists for decades. In the late nineteenth century, Marshall (1890) argued that locating companies in areas with a high concentration of companies in the same industry has advantages such as the availability of skilled labor, the availability of intermediate goods and the facility to share knowledge products, processes and innovations. In the first half of the twentieth century works such as Ohlin (1933), Hoover (1948) and Isard (1956) they have generalized this concept considering that external economies could be accessible to all companies regardless of the sector they belong. It was well over sectoral concept of “localization economies” to the global concept of “urbanization economies” (Burger et al., 2007). After several decades of relative neglect, in the 80s it began to develop the use of s patial models to alleviate the difficulties of the traditional economy to adequately explain the differences in wealth and dynamism of the regions (Piore and Sabel, 1984). However, it was not until the 90s, with the rediscovery of space both in the economy (Krugman, 1991a, 1991b) and business studies (Porter, 1990), where there have been many studies, mainly theoretical, which they have focused on the analysis of the influence of the spatial concentration of economic activities in the development of productivity and growth. Empirical contributions were substantially lower, mainly due to the lack of adequate statistical sources. Most of these applied studies focused on measuring by the territorial concentration indices of economic activity.

Faced with these works, based on territorial divisions of administrative nature, it has recently begun to emerge another stream of research that leverages the growing availability of micro-geographical data to study schemes business location from an individual perspective rather than aggregate (Durantom and Overman, 2005). The results have been generally ambiguous, if not manifestly contradictory, which has reduced the reliability requirements of regional policy conducted from the academy. An important part of these inconsistencies in the analysis could be due to problems arising from the choice of scale and geographical units. This issue, called problem of modifiable area units, or MAUP for its acronym in English, seems to have been the subject of appropriate care in the field of regional economy and, especially, in the empirical analysis of business location despite its potential impact on the validity of the econometric estimates (Kephart, 1988; Wrigley 1995, Petterson 2001, Burger et al., 2007).

Although MAUP is widely known on the theoretical level, the limited availability of regional information has made in terms applied choosing the area of analysis became a secondary issue, opting in most of the time for the territory’s disaggregated from those available. It’s pragmatic approach may be ceasing to be appropriate if the new technologies, especially those derived from the integration of geographic information systems and information from satellites, microgeographic increase the availability of information.

Geography and spatial economics have studied in depth the rules of localization of the companies, but many of the complex behaviors that are observed in the reality are still, in great measure, unexplained [1] [2]. Cellular automata and multi agent simulation models constitute new approaches to the problem [3], allow integrating in the models relevant aspects that had not been included in the analysis in quantitative terms due its high complexity. Multiagent models include agents that interact among each other and with the environment in an independent way. As Huhns and Singh [4] point out these agents consist on small self-contained programs that are able to control their own actions based on their perception of the environment and looking for, in most of the cases, the achievement of certain objetives.

Geography and spatial economics have studied in depth the rules of localization of the companies, but many of the complex behaviors that are observed in the reality are still, in great measure, unexplained [1] [2]. Cellular automata and multi agent simulation models constitute new approaches to the problem [3], allow integrating in the models relevant aspects that had not been included in the analysis in quantitative terms due its high complexity. 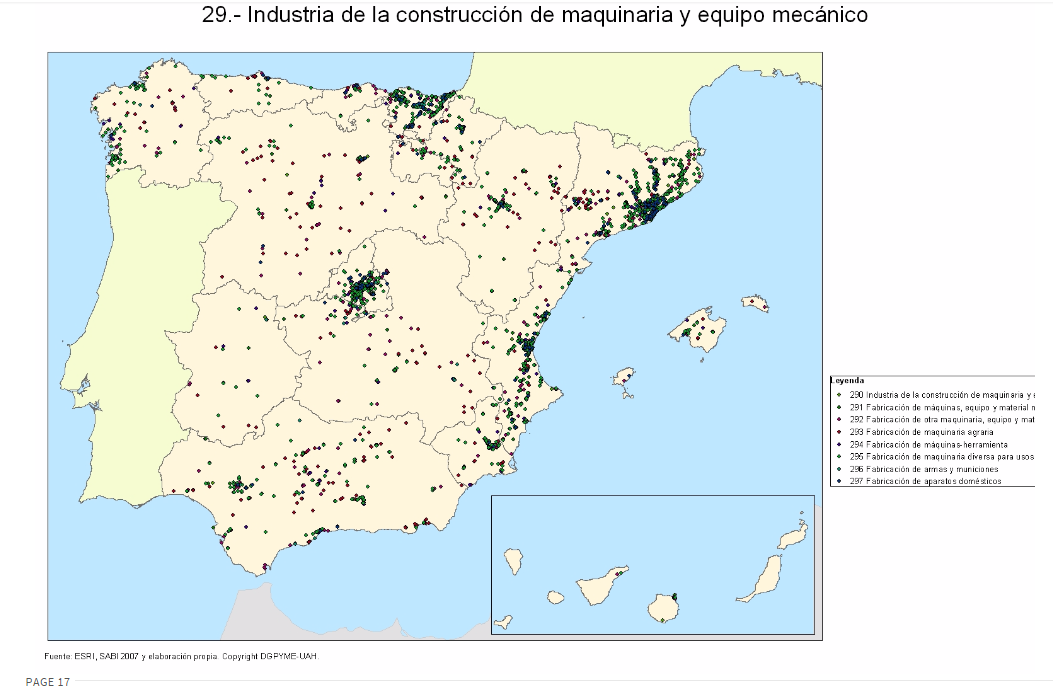 In this atlas. we can see the geographic distribution of firms in Spain by sectors (2007). 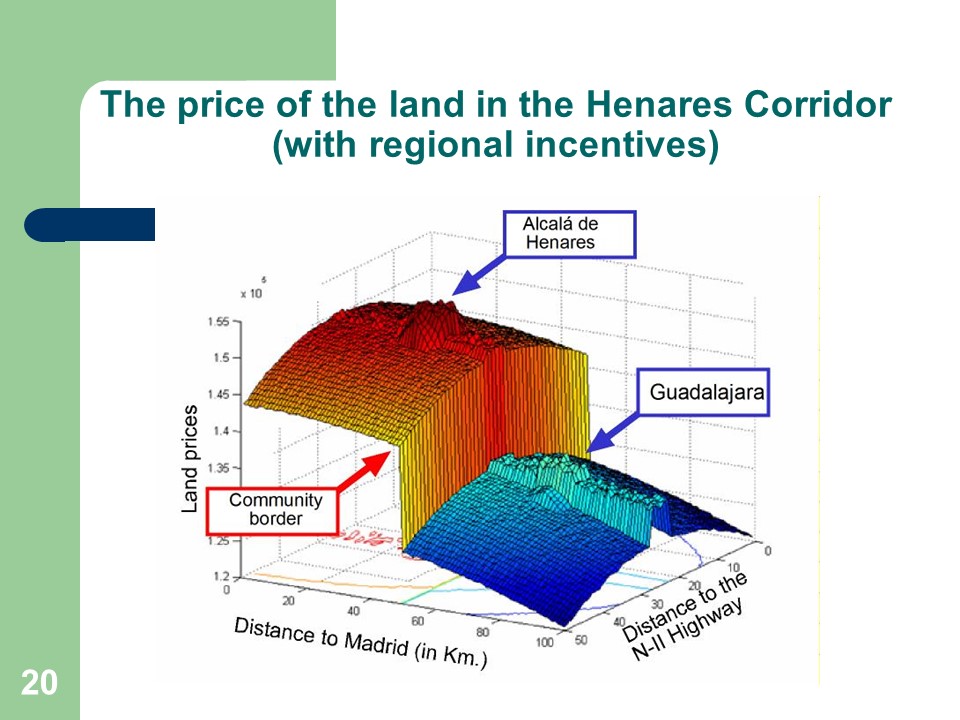 an agent based model of firm location. New firms are created each period taking into account the sector profitability and entry barriers. Firms choose their location and then they decide sequentially whether change their size or cease their activity accordingly to the profit maximization principle and the limited information they have. Their costs depend not only on the production level and the price of the productive factors but also on the land price. The characteristics of the territory where the firms are located are not static but rather evolve depending on the public policies, demographic variables and the firm localization patterns. The presented model shows endogenous rules of firm localization as well as the effects in the medium and long term of public policies.